Explore a perfect mix of old and new in Conyers, Georgia

"Conyers Rockdale has all the assets of a major metro region with the comfort and ease of a small town- they are poised for phenomenal growth." 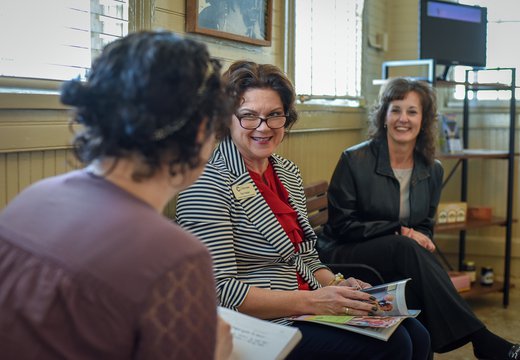 Jennifer Edwards has been a part of the Conyers story for 18 years, so far, as the Director of PR and Tourism. Teri Haler has been on board for three years, also supporting the tourism and marketing efforts. "We've seen a lot of growth here, people retiring here for the better climate, and people who move here and commute to work in Atlanta," Teri explains.

Olde Town Conyers consists of the commercial district and the residential area concentrated in and around the downtown Main Street area of the city. This historic area has really been "revamped" in the past few years (pun intended- one of the most popular vampire shows on television, The Originals, recently wrapped after filming here for five years). Visitors and residents can enjoy shopping, dining, and community all within a few blocks. The Olde Town Pavilion holds a variety of events throughout the year, including transforming into an ice skating rink in the winter. The 50's style soda fountain in the pharmacy makes hand-spun milkshakes and sells a variety of local wares. (You may even run into Mayor Vince Evans there, like we did.) 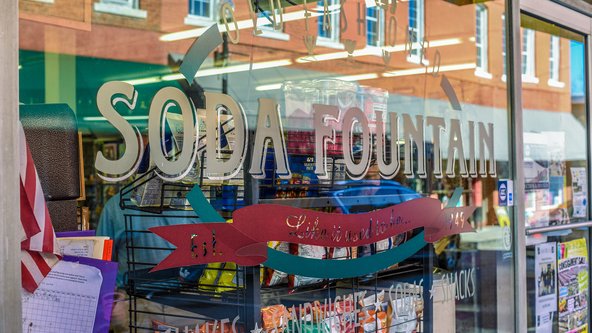 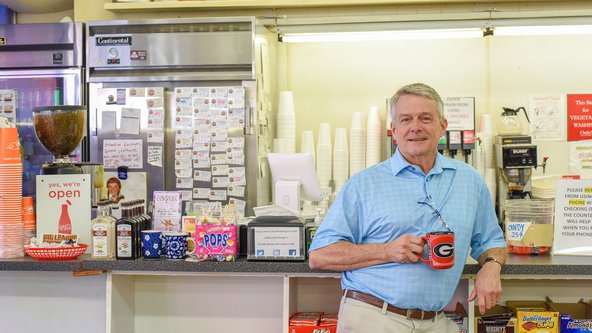 Recently, Olde Town's 2017 accomplishments were recognized in regional magazine, Georgia Connector. One of those was the design and rebranding of their city logo and mobile app, making it more symbolic of the main theme of Conyers- community. Some of the new businesses that opened in 2017 include a talent agency from Kentucky, a locally sourced chef-driven restaurant called Tin Plate, a business incubator and co-working space called e-station, a wine and gift boutique, and the most recent addition, a bicycle shop. The city added a signature event around the 4th of July that will be called the "Celebrate Community Parade". 150 convenient new parking spaces were added just across from the pavilion, where most of the town's events take place. "Our local businesses are all so unique and they are really starting to find their followings here, and bring even more visitors to Olde Town." Jennifer explains. Another recent victory - a little over six miles of the Path Foundation trails run right through Olde Town Conyers.

The mission that the city has taken on seems clear- honoring their historic charm, while also embracing the new and modern. It's not everyday you can visit an old-fashioned soda fountain just a couple of doors down from a tech incubator. "Conyers and Rockdale County have so much going for the right now," says Georgia Power Community Manager Lauren Lambiase, "They're attracting both small businesses and large industrial projects, and doing amazing things with their workforce development. Being close to the city but still having that small-town charm is also a big plus."

Sarah and Clark, two of the owners of Tin Plate: 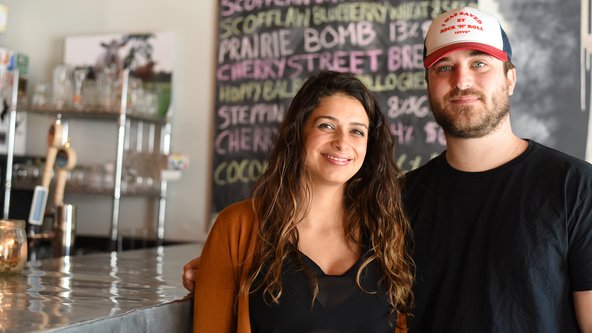 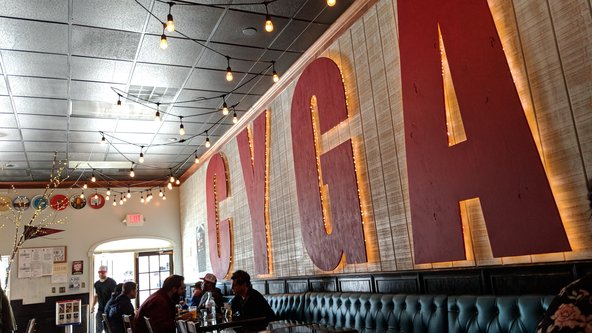 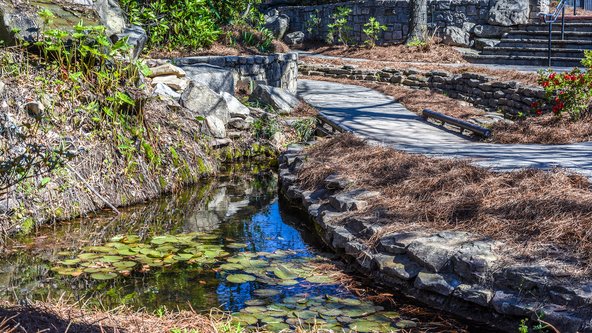 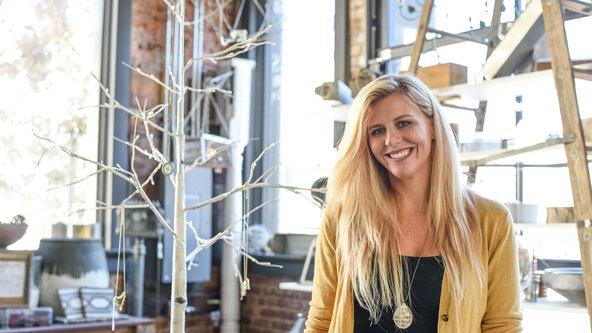 Georgia's rise to the top of the film industry has also been a boon for the city. Production crews are spending money in the shops, they have added more local jobs, and 600,000 square feet of previously empty warehouse space is now being used for studio and production space. It also allows for more tourist opportunities for the city- lots of fans of "The Originals" come to visit and see where their favorite scenes were filmed. 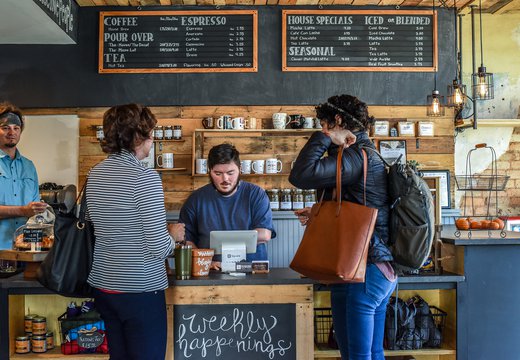 We just couldn't wander through Olde Town without a good cup of coffee, and you'll find that (and more) at Awake. Awake Coffee was founded in 2013 by Noelle and Jason Cosby, who see their shop as a place to build relationships. The nonprofit organization employs local young people who are volunteering their time to gain job experience and social skills. It's win-win for the community, the customers, and the great causes to which profits are donated, including the Rockdale Young Professional Leaders Scholarship and Haiti mission trips. Awake also hosts pop-up boutiques for local artists and makers who can sell their goods in the shop during certain times. 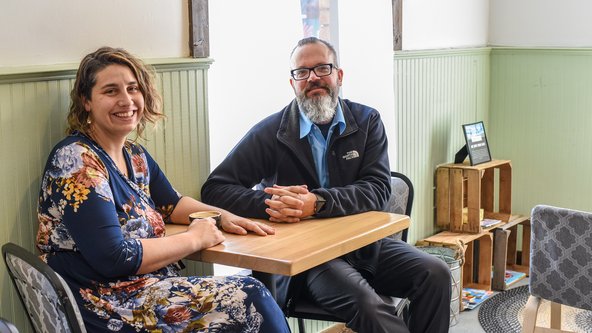 The expansion and renovation of a local favorite Mexican restaurant, Las Flores, is also making headlines in Conyers. Owner Keish Momin moved to Conyers at age 9, and has come to be a major player in the businesses here. He currently owns the local Dairy Queen, Las Flores, and the Iron Skillet, a Southern-style meat-and-three set to open later this month. Keish also has plans to open both pizza and BBQ restaurants in the near future. Keish and his wife are raising their kids here (at the time of this article, they were expecting Baby #2 any day), so he's invested in the community as a resident and a business owner. The renovation of Las Flores has been no small feat- Keish's dedication to authenticity shows in every stone, metal star, and piece of tile. Most of the building materials are imported from Mexico. "The goal is to make this the premiere AWESOME place in Conyers. I want it to keep the homey feel.  I believe in Conyers. I walk the streets, I talk to people, I love it here. It's all about community." 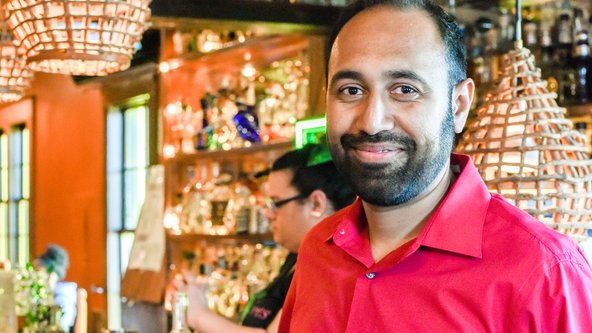 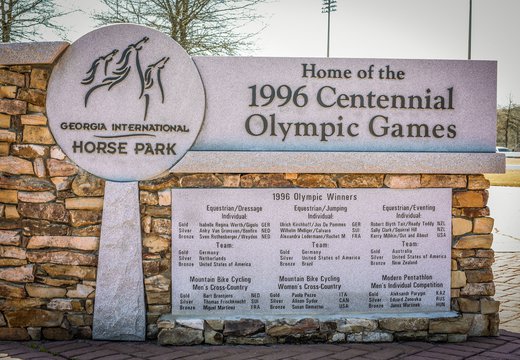 One of the major draws to the area is the Georgia International Horse Park, a 1,400-acre park that hosts thousands of events every year. Built in preparation for the 1996 Olympics, the horse park is not only a draw for equestrian events, but also for popular races like Ragnar and the Spartan Race. The property also hosts everything from business meetings to weddings, car shows to concerts. Locals and visitors can also enjoy miles of mountain bike and hiking trails. Rebecca Hill, the park's sales and marketing manager, has been on staff for almost 15 years. "I started out as an event manager," says Rebecca. "I love that no day here is the same, and that I can be indoors and outdoors. I also love to run and walk the trails. A couple of years ago when we celebrated our 20th anniversary, we looked back at old event calendars from those first few years and there were maybe 6 or 7 events for the year. Now, we'll easily have 6 or 7 events in one weekend. We could have three horse shows at one time, and a wedding reception happening in one area, along with a birthday party and a mountain bike race on the trails. We've grown tremendously over the years." At the end of March, the Park will host the Conyers Cherry Blossom Festival, and in the fall, the Atlanta Caribbean Jerk Festival.

Marty Jones has served as the Executive Director of the Conyers-Rockdale Economic Development Council for the past five years. He moved back to Conyers after getting his degree in finance from UGA and marrying his wife, Charlotte, 31 years ago. "My parents moved here when I was in high school, so it's felt like home for a long time." As soon as Marty and his family moved here, he felt the urge to get involved in the community. "As soon as we got settled in, you know, we've been in the house a few weeks and Charlotte says 'what do you want to do today' and I say 'I want to go see a council meeting!'" Marty laughs. Within two years of moving to Conyers, Marty was voted onto the city council, where he spent 23 years. After retiring from city council, Marty applied for his current position. "Conyers from 30 years ago to now has really evolved. Back then, you could walk to the store and get a Coke or go to the drugstore, and that was pretty much it. It's taken a long time to get Olde Town the way it is now, but the work never ends. Whatever you're doing for your community to help it grow, you have to continue to support every business, every tenant."

Marty likes to say that "Rockdale makes things"- and he usually starts that story with a red Solo cup in his hands (yep, those are made in Rockdale county). That company, Dart, has recently expanded, adding new equipment and jobs- since the update, they can make 1,800 cups in one minute. Acuity Brands is also located there, producing commercial lighting. Pratt Industries, an Australian-based paper plant, uses only recycled products to make their paper, and projects many more expansions in the U.S. over the next decade. Hillphoenix produces grocery store refrigeration units.  Many of these industries make up a big part of the job market in Rockdale county, and it continues to grow with expansions and new location announcements. "Batchelor & Kimball recently put a new facility here, an HVAC and plumbing company.  Anthony International is a new one and they're up to about 200 employees there. Volume Transportation moved in a couple of years ago and there are about 250 working there."  Georgia Power research analyst Marion Phillips reports that Conyers has seen 8.1% job growth in the last five years, adding more than 2,300 jobs. 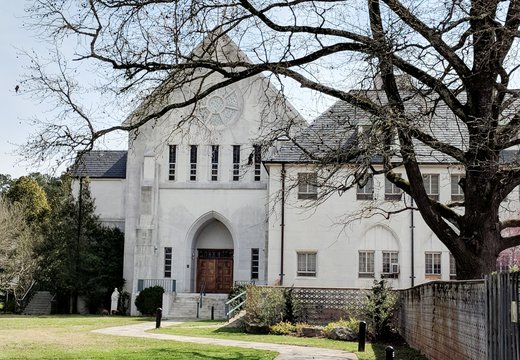 There's another big reason people seem to be flocking to Conyers- spiritual peace and religious wisdom. Conyers is home to the Monastery of the Holy Spirit. This 17,000 square-foot complex got its start in 1944, when a group of Trappist monks moved from Kentucky to build a new home and church. From humble beginnings (21 monks built the main structure by hand, while living in a modest barn), the Monastery has evolved to add a visitor's center, a historic museum that walks guests through the history of the monastic tradition, a bonsai garden, the abbey gift shop, church, nature trails, and retreat housing. "Monastic values are actually common to everybody," says Brother Callistus, our tour guide. "Prayer, work, silence, community- these are intricate to all of humanity. As monks, we simply seek to deliberately live those core values daily in the monastery." All are welcome at the Monastery during visiting hours, and we highly recommend a trip there- it is a destination not to be missed during a visit to Conyers. 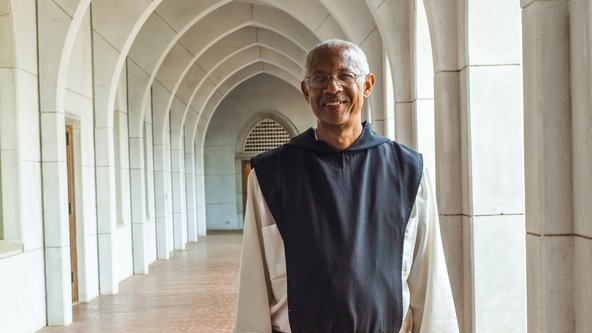 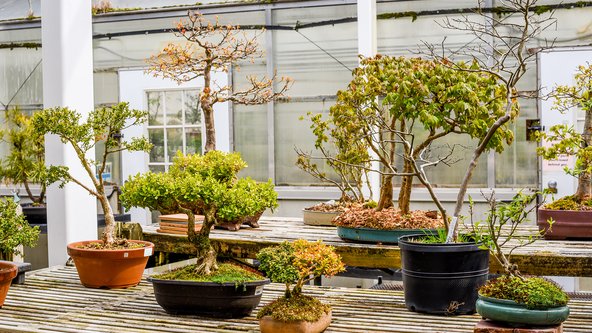 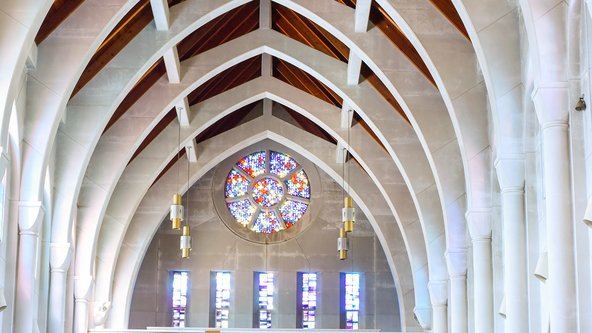 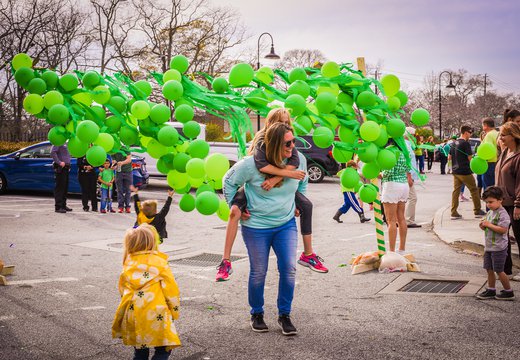 In Olde Town and throughout the entire county of Rockdale, there is an undeniable feeling of friendship and growth. Our visit coincided with the town's annual St. Patrick's Day Parade, led by Mayor Evans and followed by Marty Jones, and we couldn't have picked a better time to get to know the community. "We just want to bring everybody together, and make them aware of the possibilities we have here," Jennifer says. "We always have something worth celebrating, whether it's a birthday, or a new job, or a new business opening up. We're so excited to share those celebrations with our community and our guests." Citizens began to line the streets as a band set up for the festivities. The local Irish pub was in full swing. Kids and pets alike were decked out in their finest leprechaun-themed gear. The soda fountain whipped up green milkshakes, handed out beads with every order, and we felt very lucky indeed. 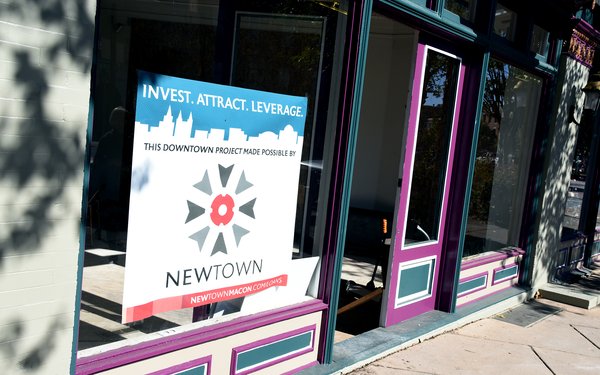 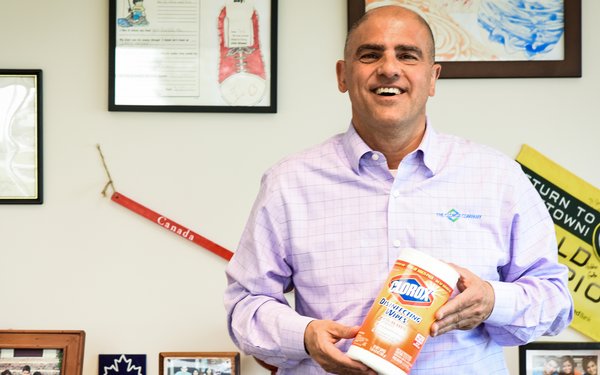